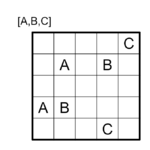 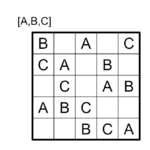 Place letters of the specified list into some cells, no more than one letter per cell, so that each letter appears exactly once in each row and column. No 2×2 group of cells can be entirely filled with letters.

Possibly of Turkish origin, since Fuzuli is also the name of a 16th century Turkish author.[1] A round in 2007 24hPC by Cihan Altay (Turkey) had one, according to IB.

Retrieved from "https://wpcunofficial.miraheze.org/w/index.php?title=Fuzuli&oldid=354"
Categories:
Cookies help us deliver our services. By using our services, you agree to our use of cookies.