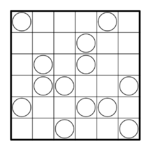 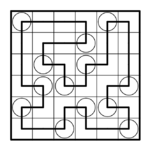 Appeared on WPC 1999/Part 5, an "innovatives" round. The author is unknown. The puzzle is known as "Minden Második Töréspont" in Hungarian that has roughly the same meaning as the English title. 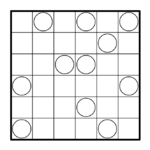 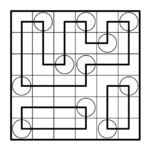 First appeared on the first LMI Screen Test contest in December 2010.[1] The puzzle was by Deb Mohanty (India).

Draw several closed loops in the grid passing through centres of cells horizontally and vertically, so that each cell is visited by exactly one loop. The loops must turn at breakpoints, i.e., cells with circles. Additionally, for each loop, there must be exactly one turn between two breakpoints that the loop visits. A loop cannot cross or overlap other loops.

Retrieved from "https://wpcunofficial.miraheze.org/w/index.php?title=Every_Second_Turn&oldid=1764"
Categories:
Cookies help us deliver our services. By using our services, you agree to our use of cookies.