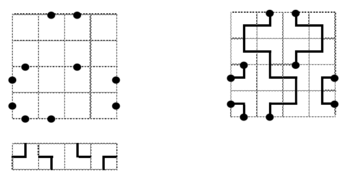 Place the given pieces into each cell of the grid, so that each piece appears exactly once in each row and column. Every “blind end“ of a line (an edge that is not connected to another line) is marked with a circle.

First appeared on WPC 2016/Round 11, an "innovative" round under the name "Railroads". The author of the puzzle was Matej Uher (Slovakia). Later appeared on Puzzle GP 2019 Round 7 under the name "Endpoints", possibly to avoid confusion with Railroad Tracks, a puzzle also called Railroads.

Retrieved from "https://wpcunofficial.miraheze.org/w/index.php?title=Endpoints&oldid=2377"
Categories:
Cookies help us deliver our services. By using our services, you agree to our use of cookies.