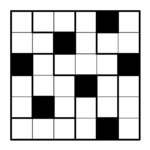 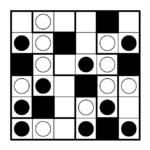 Place balloons, i.e. white circles and iron balls, i.e. black circles into some empty cells of the grid so that each thickly outlined region contains one balloon and one iron ball. Balloons are light and float, and thus must be placed at the top of the grid, immediately under black cells, or under other balloons. Iron balls are heavy and sink, and thus must be placed at the bottom of the grid, immediately above a black cell, or above other iron balls.

Retrieved from "https://wpcunofficial.miraheze.org/w/index.php?title=Dosun_Fuwari&oldid=1790"
Categories:
Cookies help us deliver our services. By using our services, you agree to our use of cookies.