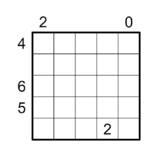 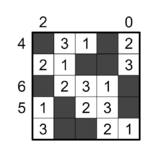 Place either a block or a number from 1 to X (integers only) into each cell so that each number appears exactly once in each row and each column. (X is two fewer than the number of cells in each row.) Each row and each column will therefore have exactly two cells with blocks in them. The numbers outside the grid indicate the sum of the numbers between the two blocks in that row or column. Some cells may already be filled in for you.

Also independently invented by Naoki Inaba (Japan) in 2008 under the name ハサムサム ("Sandwiched Sum"). Original set of puzzles by Naoki can be seen here

Unless noted, the first rule of Doppelblock (placing 1-X and two black cells per row/column) applies.

First appeared in WPC 2019/Round 2. The puzzle was written by Gabi Penn-Karras (Germany). 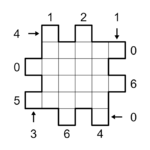 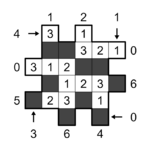 Enter numbers from 1 to X into the grid and shade the remaining cells, so that each full row and column (consisting of X+2 cells) contains each number exactly once as well as two shaded cells. (X is two fewer than the number of cells in each row.) 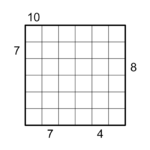 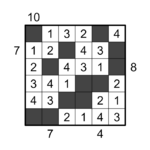 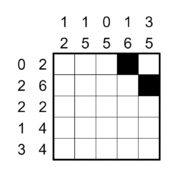 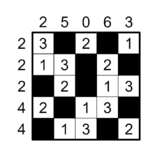 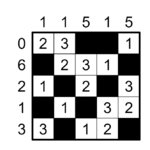 In the given grid, half of the clues belong to one Doppelblock puzzle and the other half belong to the other. Furthermore, all the cells where both puzzles does not contain numbers are marked in the given grid. Reconstruct two puzzles and solve them.