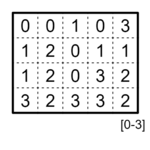 Divide the grid into a given set of dominoes. Each domino should be used exactly once. The orientation of the letters does not matter. Empty cells are not part of a domino.

The puzzle was patented in 1893 by Richard Osa (Germany), under the name "Dominosa Omnibus".[1]

First appeared on WPC 2018/Round 5. The puzzle was by František Luskač (Czech Rep).

Divide the grid into triminoes where each trimino represents two overlapping domino tiles. The whole set of domino tiles from the given set has to be used.

Retrieved from "https://wpcunofficial.miraheze.org/w/index.php?title=Domino_Hunt&oldid=1708"
Categories:
Cookies help us deliver our services. By using our services, you agree to our use of cookies.