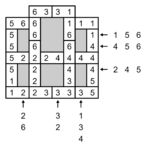 Place the given dominoes into the shape. Values in the halves which touch each other must be the same. Numbers outside show all values which are in the corresponding row or column.

WPC 1994 had similar puzzle. There were no outside hints and for each domino whether they are placed horizontally or vertically were given.

Also known as "Domino Figure." The name is probably a translation of "Dominofigur" from 1996 German Nationals.

Retrieved from "https://wpcunofficial.miraheze.org/w/index.php?title=Domino_Castle&oldid=2216"
Categories:
Cookies help us deliver our services. By using our services, you agree to our use of cookies.