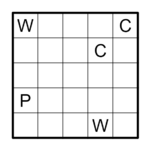 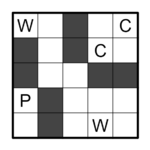 Divide the grid into some regions formed of adjacent squares, with using dominoes (1×2 black cells). Dominoes cannot overlap or touch each other by the sides. Each region must contain only the same letters and at least one letter. All the identical letters have to be in the same region.

Invented by Naoki Inaba (Japan) in 2010. First set of puzzles he created can be seen here.

Retrieved from "https://wpcunofficial.miraheze.org/w/index.php?title=Dominion&oldid=594"
Categories:
Cookies help us deliver our services. By using our services, you agree to our use of cookies.