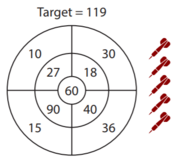 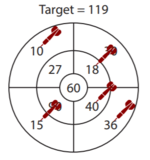 "Throw" the given number of darts onto the dartboard. Each dart must be thrown into a numbered region, and no two darts can be thrown into the same region. The sum of the numbers in the regions with darts must add up to the specified target score.

This puzzle can be seen as sub-problem of subset sum problem, a problem in combinatorial optimisation. It is a subproblem of Knapsack problem, first described in 1897.[1]

"Archery Puzzle", described by Sam Loyd (USA) in 1914 uses the same rule. In this puzzle, number of darts was not given and regions could be hit multiple times.

Retrieved from "https://wpcunofficial.miraheze.org/w/index.php?title=Darts&oldid=1466"
Category:
Cookies help us deliver our services. By using our services, you agree to our use of cookies.