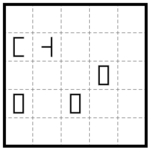 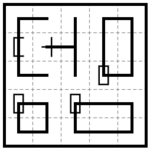 Make some figures by drawing vertical or horizontal lines passing through the centres of cells so that each figure goes through exactly one clue. All the cells must be visited by lines. Each clue shows how the lines of the figure on it turn or connect without any rotation or reflection. The clues do NOT imply lengths of any part of the line. Different figures must not share the same cells.

Invented by Tatsuya Yamamoto (Japan) in 2002. First appeared as a submission to Internet Gekisakujuku, a contest where the best new puzzle type was decided from types submitted by readers of Puzzler magazine. In the original rules, there was an additional rule that required each figure not to occupy 2x2 square. Naoki Inaba (Japan) removed that rule in 2011 and presented his version in JZC 2011.[1]

Retrieved from "https://wpcunofficial.miraheze.org/w/index.php?title=Curve_Data&oldid=2436"
Categories:
Cookies help us deliver our services. By using our services, you agree to our use of cookies.