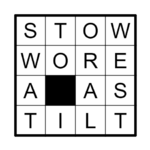 Enter the given words in the grid, one character per cell. Each word is used exactly once, and will either read left-to-right or top-to-bottom.

Unknown. Probably first appeared at the similar time as Word Search puzzle (first appeared 1968). Probably branched off from crossword puzzles. The oldest example found is Shigeo Takagi's puzzle in 1976[1], but the puzzle itself definitely predates it. See also Scrabble. 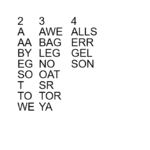 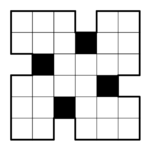 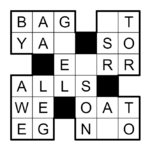 Appeared on WPC 1999/Part 5, an "Innovatives" round. Author of the puzzle is unknown.

Place the given words into the grid, from left to right and top to bottom in each consecutive line of cells, separated by grid borders and black cells. The words may jump over some cells, even the first or the last ones, but never more than one cell for one jump. The jumped cells are also jumped by any intersecting word. The jumps are not indicated in the listed words.

Retrieved from "https://wpcunofficial.miraheze.org/w/index.php?title=Crisscross&oldid=2151"
Categories:
Cookies help us deliver our services. By using our services, you agree to our use of cookies.