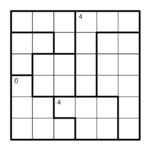 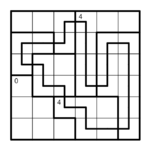 Draw a closed loop passing through the centres of cells horizontally and vertically. The loop must not return to any thickly outlined region it has already visited, and any two cells touching by a side that the loop does not visit must be in the same region. The loop does not have to visit all regions. A number in a region indicates the number of cells visited by the loop in that region.

Retrieved from "https://wpcunofficial.miraheze.org/w/index.php?title=Country_Road&oldid=1820"
Categories:
Cookies help us deliver our services. By using our services, you agree to our use of cookies.