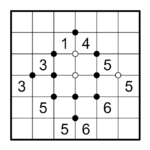 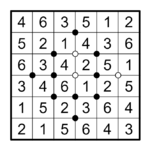 Consecutive Quads Sudoku first appeared on the Round 3 of 2015 Sudoku Grand Prix. Author of the puzzle was Ashish Kumar (India). [1]

Retrieved from "https://wpcunofficial.miraheze.org/w/index.php?title=Consecutive_Quads&oldid=1382"
Categories:
Cookies help us deliver our services. By using our services, you agree to our use of cookies.