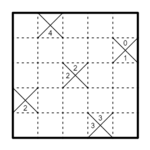 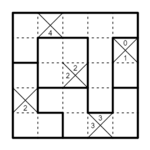 Divide the grid along the dotted lines into regions (groups of cells that are connected north-south or east-west, where north is towards the top of the page). Each cell must be in exactly one region, and each region must contain exactly one clue. For each clue, the number in the north part indicates how many cells of that clue‘s region are located North of the clue cell (irrespective of their East-West location). Analogously, numbers in the west, east, and south part indicate how many cells of that region are located West, East and South of the clue cell.

The first puzzle including Compass with incomplete information was from Puzzle Grand Prix 2014 and was written by Robert Vollmert (Germany). 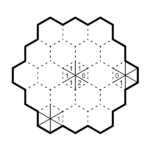 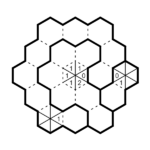 First appeared on WPC 2017/Round 5, a "Hexed & Remixed" round. Author of the puzzle was Rohan Rao (India). The clues are weaker than that of regular Compass clues, and therefore this puzzle works the best on irregular grids, especially on hexagonal one.

Each cell divided into triangles indicates a different connected region. Numbers indicate the number of cells occupied by the region in the corresponding direction.

Retrieved from "https://wpcunofficial.miraheze.org/w/index.php?title=Compass&oldid=2143"
Categories:
Cookies help us deliver our services. By using our services, you agree to our use of cookies.