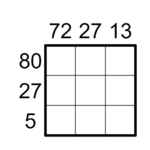 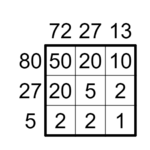 Place one coin into each cell such that the sum of the coins in each row (and column) matches the number to the left (and the top). The valid denominations of coins are supplied with the puzzle; the same denomination may be used multiple times in each row (or column).

Appeared on WPC 2005/Part 5, "Hungarian style" round. Author of the puzzle was Sándor Elekes (Hungary). However, it is possible that the puzzle predates this.

Retrieved from "https://wpcunofficial.miraheze.org/w/index.php?title=Coins&oldid=2225"
Categories:
Cookies help us deliver our services. By using our services, you agree to our use of cookies.