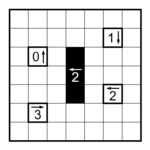 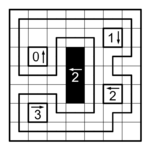 Draw a single closed loop passing through some empty cells in the grid. The loop connects centers of adjacent cells, makes only right-angle turns or goes straight, and does not intersect or cross itself. The grid contains some bordered or black cells that cannot be part of the loop. Bordered cells must be inside the loop; black cells must be outside the loop. Numbers and arrows refer to the total sum of the lengths of straight loop segments along the given direction. (An equivalent way to understand these values is by putting a dot each place the loop crosses a cell border. Each numbered arrow then points to that number of dots.)

Invented by Palmer Mebane (USA) in 2009. His first puzzle can be seen in his old blog. 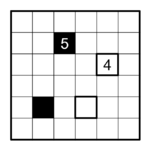 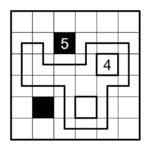 First appeared on WPC 2019. The author was Jürgen Blume-Nienhaus (Germany).

Draw a closed loop into the grid that runs horizontally and vertically and passes through each cell at most once. Black cells must be outside the loop, white cells with heavy borders must be inside the loop; this includes marked cells with and without numbers. The numbers indicate the total length of all horizontal loop segments in the respective row plus the total length of all vertical loop segments in the respective column.

Retrieved from "https://wpcunofficial.miraheze.org/w/index.php?title=Castle_Wall&oldid=1590"
Categories:
Cookies help us deliver our services. By using our services, you agree to our use of cookies.