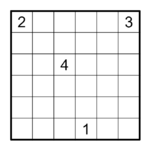 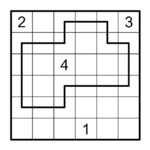 Serkan Yürekli named the puzzle in 2009 after the home country of Dragan Tolomanoski (Bosnia & Herzegovina), the puzzle's inventor. [1] 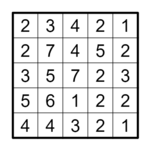 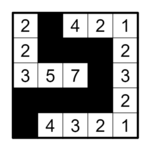 First appeared on WPC 2016/Round 4 ("Full Classics" round). Author of the puzzle was Matúš Demiger (Slovakia).

Shade some cells to get a valid Bosnian snake solution:

Shade some cells in the grid to create a single one-cell-wide snake in the grid. The snake cannot touch itself, not even diagonally. The remaining (unshaded) numbers in the grid indicate how many of the 8 cells around it are occupied by the snake. The position of the head and the tail is unknown.

Retrieved from "https://wpcunofficial.miraheze.org/w/index.php?title=Bosnian_Road&oldid=2253"
Categories:
Cookies help us deliver our services. By using our services, you agree to our use of cookies.