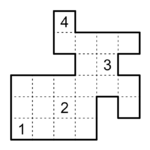 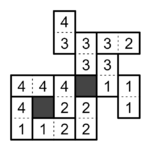 Shade some cells, divide the remaining unshaded cells into dominoes and enter numbers into the unshaded cells, so that each domino appears exactly once. Horizontally or vertically adjacent cells that are part of different dominoes must contain equal numbers. Shaded cells cannot be horizontally or vertically adjacent to each other or to the border of the grid, they may touch each other or the border diagonally.

Probably invented by Richard Stolk (Netherlands) in 2011. First puzzle found so far is one on LMD portal.

This puzzle was originally a variant of a different domino puzzle (mostly just called "Domino"). In an original, all black cells were given. One example of the original can be seen here.

Retrieved from "https://wpcunofficial.miraheze.org/w/index.php?title=Blackout_Dominoes&oldid=1687"
Categories:
Cookies help us deliver our services. By using our services, you agree to our use of cookies.