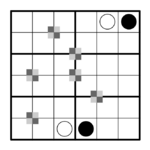 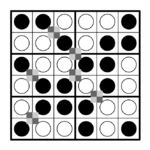 Place a given number of black and white circles in every row, column and thickly outlined region. Wherever two black and two white circles form a 2x2 checkerboard pattern, a Battenburg marking is given. Some circles are already placed.

Battenburg Sudoku first appeared on Bram de Laat's (Netherlands) website in 2013 as a part of Daily League Sudoku series. This puzzle was developed as a practice material for the said puzzle. [1]

The name comes from Battenburg markings used for emergency services in the UK and other regions. [2]

Retrieved from "https://wpcunofficial.miraheze.org/w/index.php?title=Battenburg&oldid=1784"
Categories:
Cookies help us deliver our services. By using our services, you agree to our use of cookies.