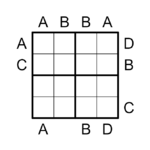 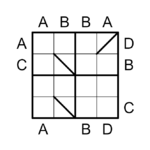 Place mirrors in the grid, at most one per thick-outlined region such that no two cells containing mirrors touch each other, even diagonally. Lasers enter the grid from each marked row/column and turn 90-deg at mirrors and finally exit the grid. Some entryexit pairs of lasers are marked by alphabets. If there are multiple pairs of the same alphabet, it is part of solving to identify the right pairs.

First appeared on WPC 2017/Round 1. The puzzle was by Rohan Rao (India). The name may refer to Bangalore Mirror, a local newspaper published in the WPC 2017 venue.

Nikoli's "Kin-Kon-Kan" also has a similar rule of mirrors and letters. However, it has slightly different rules compared to Bangalore Mirror: (i) every region must contain exactly one mirror, (ii) there are no multiple pairs of same letters and (iii) numbers of reflections are given alongside letters.[1]

Retrieved from "https://wpcunofficial.miraheze.org/w/index.php?title=Bangalore_Mirror&oldid=1359"
Categories:
Cookies help us deliver our services. By using our services, you agree to our use of cookies.