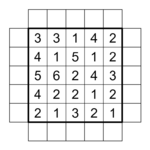 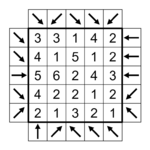 Draw an arrow in each of the empty cells outside the main grid. Each arrow must point in one of the eight standard directions and must point to at least one numbered cell. Each numbered cell must be pointed at by exactly that number of arrows.

First appeared on Puzzler magazine. When and by whom it was invented is currently unknown. 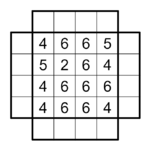 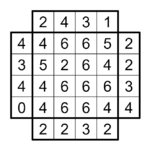 First appeared on WPC 2016/Round 11. The author of the puzzles was Ján Farkaš (Slovakia).

Put a number in each of the empty cells outside the main grid. Each number indicate the intensity of a lamp located in that cell. A lamp with 0 intensity is possible. A lamp of intensity N lits N cells in each of 8 directions. Each numbered cell must be lit by exactly that number of lamps.

Retrieved from "https://wpcunofficial.miraheze.org/w/index.php?title=Arrows&oldid=2383"
Categories:
Cookies help us deliver our services. By using our services, you agree to our use of cookies.