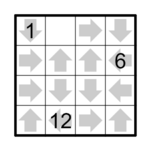 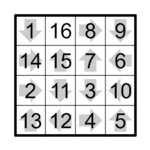 Find a path through the maze by visiting every cell of the grid exactly once. Start with the cell with number 1, then write numbers in order in each cell you visit and finish in a cell with number N. You can jump from one cell to another(not necessarily neighbouring cell) horizontally or vertically but only in the direction of the arrow. Some numbers are already given.

Unknown. Probably of Dutch or German origin, as it featured in 1995 German Finals under the name "Labyrinth". [1]

Retrieved from "https://wpcunofficial.miraheze.org/w/index.php?title=Arrow_Maze&oldid=2268"
Categories:
Cookies help us deliver our services. By using our services, you agree to our use of cookies.