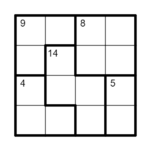 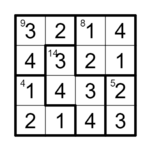 Write a number from the given set into each field of the grid, so that each number occurs exactly once in each row and column. Small hints in a boldly outlined region give the sum of the numbers in that region. Numbers may repeat within a region.

Pretty basic Latin square puzzle and probably independently developed here and there. "Figure Square" from WPC 1997 is one example. Rules were the following:

"Fill in the grid (one number per box) so that each number from 1 to 6 appears exactly once in each row and column of the diagram and all of the equations are correct." (Cells were numbered in chess notation and equations looked like "A1 + A2 = 8" etc.) 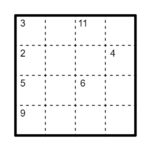 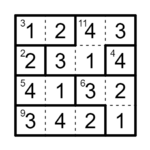 First appeared on WPC 2019. The author was Roland Voigt (Germany).

Divide the grid into regions, so that each region contains exactly one clue number that is located within its region in the leftmost cell of the topmost row. Furthermore, enter numbers from the given set into the grid so that each number appears exactly once in each row and column. In each region, the sum of these numbers must equal the clue number of that region. Numbers may repeat within a region.

Retrieved from "https://wpcunofficial.miraheze.org/w/index.php?title=Area_Sums&oldid=2463"
Category:
Cookies help us deliver our services. By using our services, you agree to our use of cookies.