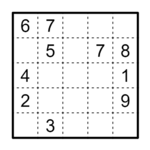 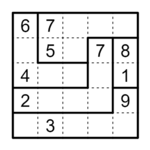 Divide the grid into regions so that each region contains exactly two numbers. For each region, one of its numbers is greater than its size and the other is smaller.

The name Araf was given by Serkan Yürekli (Turkey). It means "purgatory" in Turkish. 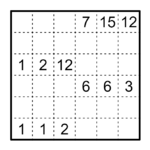 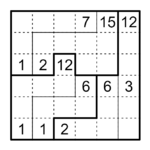 Invented by Prasanna Seshadri (India). First appeared on WPC 2017/Round 20.

Divide the grid into some regions containing four circles each. Each cell is part of one region. Each region must have an area that is strictly between the smallest and the largest of the numbers in the circles contained in it. Further to this, each region must also be divided into two sub-regions, each containing exactly two given numbers, and each having an area strictly between the two numbers they contain.

Retrieved from "https://wpcunofficial.miraheze.org/w/index.php?title=Araf&oldid=1992"
Categories:
Cookies help us deliver our services. By using our services, you agree to our use of cookies.