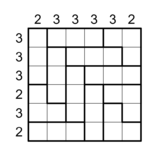 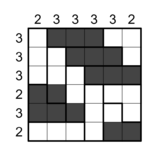 Fill some cells with water so that the numbers at the borders indicate how many cells in the corresponding row or column contain water. Within an area, the cells must be filled up from the bottom up. Within a row of an area, all cells must always be filled with water or none (even if there are other areas in between).

Retrieved from "https://wpcunofficial.miraheze.org/w/index.php?title=Aquarium&oldid=1692"
Categories:
Cookies help us deliver our services. By using our services, you agree to our use of cookies.