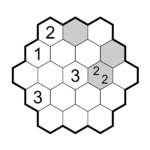 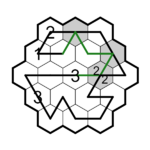 Draw a loop that passes through all cells of the grid. The loop cannot cross, intersect or overlap itself. All cells that the loop passes through more than once are shaded. Each number in a cell indicates the distance between the edge through which the loop enters that cell and the edge through which the loop exits that cell. The distance is measured along the edges. In any cell with clues, the numbers cover all instances of the loop visiting that cell.

(Rules and example from WPC 2017 IB. Colouring of the loop is just for illustrative purposes.)

First appeared on WPC 2017/Round 5, "Hexed & Remixed" round. Author of the puzzle was Prasanna Seshadri (India).

The puzzle was presented on a grid including four-pointed stars with eight sides. This puzzle works best on irregular grids, since there are only four sides in cells of conventional square grids.

Retrieved from "https://wpcunofficial.miraheze.org/w/index.php?title=Adjacency_Loop&oldid=1565"
Categories:
Cookies help us deliver our services. By using our services, you agree to our use of cookies.