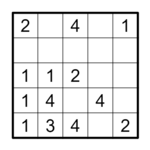 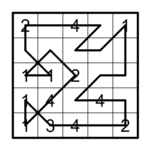 Draw a closed loop into the grid, that travels horizontally, vertically and diagonally and passes through each cell exactly once. The loop may cross itself. The numbers indicate what kind of turn the loop makes in the respective cells: a clue number times 45° gives the angle formed by the loop, see figures below (rotations are possible).

Retrieved from "https://wpcunofficial.miraheze.org/w/index.php?title=Achtelwenden&oldid=304"
Categories:
Cookies help us deliver our services. By using our services, you agree to our use of cookies.