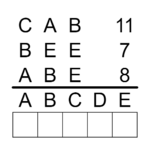 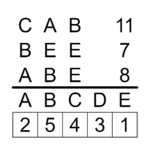 Write a number under each letter (in each cell) so that the numbers corresponding to the letters in each given word have the given sum. Different letters must have different numbers. The list of allowed numbers is given in a row underneath the cells.

According to LMD Wiki, first round of 1994 German Nationals had one under the name of "Buchstaben-Roulett" ("Letter Roulette"). MIT Mystery Hunt 1994 has one, too, though this might be the same problem as one in German Nationals.

First example under the name "ABCtje" seems to be from 2002 Dutch Championship, where the puzzle was written by Hans Eendebak (Netherlands).

"-tje" is a "diminutive plural" suffix in Dutch language. So the word "ABCtje" means "ABC's", and hence, "Easy as ABC". The Easy as puzzle is known as Letterraam in Netherlands.

Retrieved from "https://wpcunofficial.miraheze.org/w/index.php?title=ABCtje&oldid=185"
Categories:
Cookies help us deliver our services. By using our services, you agree to our use of cookies.