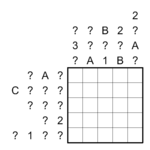 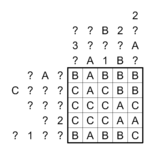 Place exactly one letter from the set {A, B, C} into each cell. (Cells may not remain empty.) Symbols outside the grid indicate all groups of continuous cells with the same letter along that row or column. The symbols are given in the same order as their corresponding groups. If a symbol is a number, it indicates the length of that group in cells; if a symbol is a letter, it indicates the letter in the cells for that group. If a symbol is a “?” (question mark), then no extra information about the group is given beyond its existence.

Invented by Naoki Inaba (Japan) in 2001. The first set of puzzles by him can be seen here.

There were no numbers in the original ABC-Box. They were introduced by Bernhard Seckinger (Germany) in his puzzle from March 2011, seen here.

Retrieved from "https://wpcunofficial.miraheze.org/w/index.php?title=ABC-Box&oldid=2527"
Categories:
Cookies help us deliver our services. By using our services, you agree to our use of cookies.