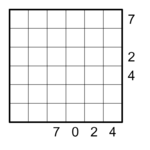 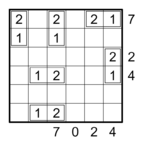 Place tiles of 1x2 cells in the grid, with numbers 1 and 2 each. Tiles can be rotated but they cannot touch each other, even diagonally. Numbers outside the grid indicate the sum of all the numbers in the corresponding row/column.

First appeared on WPC 2012/Round 2 ("Blackjack", a 21-themed round) to commemorate the 21st World Puzzle Championship. Author of the puzzle is unknown.

Retrieved from "https://wpcunofficial.miraheze.org/w/index.php?title=2-1_Tiles&oldid=2219"
Categories:
Cookies help us deliver our services. By using our services, you agree to our use of cookies.