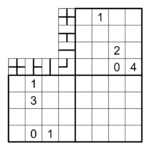 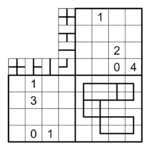 Draw the map of an underground railway into the grid. The map consists of horizontal and vertical lines connecting adjacent cells. All lines are interconnected, and there are no dead ends; some cells may remain unused. The numbers outside the grid indicate how many cells of a specific type (crossing, junction, straight line or curve, regardless of rotation) appear in the respective row or column.

The puzzle is probably of a Hungarian origin and dates back to at least 2005. It appeared on a playoff round of 2005 Hungarian Nationals.

Retrieved from "https://wpcunofficial.miraheze.org/w/index.php?title=U-Bahn&oldid=2091"
Categories:
Cookies help us deliver our services. By using our services, you agree to our use of cookies.