Tiger in the Woods 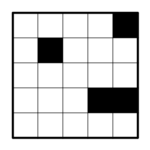 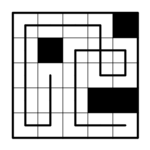 Draw a path in the grid that starts from any white cell and travels horizontally and vertically to visit every white cell. The path can cross over itself but it may not overlap itself. It cannot cross the start or end cells. Following the path from the starting cell, it may change direction only after facing either a black cell or the edge of the grid. The path must end facing a black cell or edge.

First appeared on WPC 2005/Part 5. Author of the puzzle was Zoltán Horváth (Hungary).

Probable precursor to this puzzle appeared on 2002 US Qualifier.[1] The puzzle, also entitled "Tiger in the Woods," asked solver to find a shortest way through the maze under the same rule about changing of the direction. Author of the puzzle was Nob Yoshigahara (Japan). Some puzzles in the competition was golf-themed, hence the name.

Retrieved from "https://wpcunofficial.miraheze.org/w/index.php?title=Tiger_in_the_Woods&oldid=1743"
Categories:
Cookies help us deliver our services. By using our services, you agree to our use of cookies.