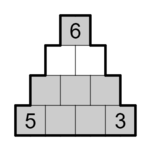 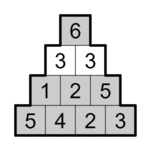 Enter numbers from 1 to 9 into the cells of the pyramid, so that each number is either the sum or the difference of the two numbers in the cells below. In gray rows, no number may occur twice, while in white rows at least one number does occur twice.

Earliest instance found is "Figure Pyramid" from "varia" round of 2003 Dutch Nationals. The puzzle was written by Hans Eendebak (Netherlands).

Retrieved from "https://wpcunofficial.miraheze.org/w/index.php?title=Pyramid&oldid=1482"
Categories:
Cookies help us deliver our services. By using our services, you agree to our use of cookies.