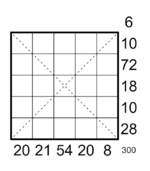 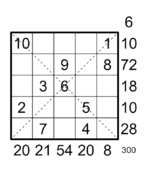 Fill in some cells with numbers.

When given, the numbers below and to the right of the grid indicate the multiplicative product of all numbers in that row, column, or long dotted line diagonal, respectively. (The product of one number is the number itself; the product of no numbers is 1.)

Probably first appeared on WPC 1996 under the name "Number Grid". The author of the puzzles is unknown.

Retrieved from "https://wpcunofficial.miraheze.org/w/index.php?title=Products&oldid=2523"
Categories:
Cookies help us deliver our services. By using our services, you agree to our use of cookies.