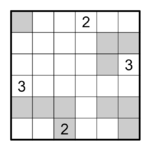 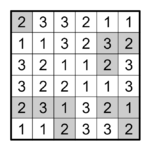 (Rules from PGP IB, example from WPC 2019 IB. Rules have been generalized to arbitrary grid size)

Hans Eendebak (the Netherlands) invented the puzzle in 2012, according to Richard Stolk.

Retrieved from "https://wpcunofficial.miraheze.org/w/index.php?title=Neighbours&oldid=91"
Cookies help us deliver our services. By using our services, you agree to our use of cookies.