Difference between revisions of "Meandering Numbers" 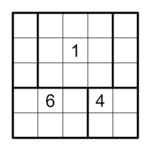 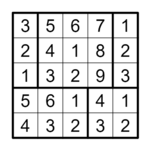 Invented by Daisuke Takei (Japan) in 2014. First appeared on Japanese round of 2014 Puzzle Grand Prix as "Count Number". The name Meandering Number was first given in Toketa volume 2 (2014). Refer to Toketa for a more detailed history of this puzzle.

This puzzle can be considered as a variant of Suguru with one added rule, "pair of numbers with a difference of 1 in the same region must share an edge".

Retrieved from "https://wpcunofficial.miraheze.org/w/index.php?title=Meandering_Numbers&oldid=2699"
Categories:
Cookies help us deliver our services. By using our services, you agree to our use of cookies.