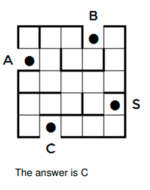 An example puzzle from WPC 2017 IB: which exit is nearest from the starting point?

Find a path through the maze from the entrance to the exit.

The Cretan Labyrinth appears in Greek mythology. However, although now the term "labyrinth" is almost synonymous with the word "maze", labyrinths in the ancient times consisted of one winding path.

Mazes with dead ends were introduced when complicated hedge mazes emerged in England in the 17th century. [1]

Retrieved from "https://wpcunofficial.miraheze.org/w/index.php?title=Maze&oldid=2500"
Category:
Cookies help us deliver our services. By using our services, you agree to our use of cookies.