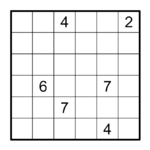 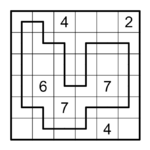 Draw a closed loop into the grid that runs horizontally and vertically and passes through each cell at most once. The loop does not pass through numbered cells. The numbers indicate how many of the horizontally, vertically and diagonally neighbouring cells are used by the loop.

Invented and named by Jak Marshall (UK) in 2010. First set of puzzles by Jak can be seen on janko.at.

However, due to the simplicity of rules, this puzzle may have been re-invented many times. An example is "Snake Pit" from WPC 1996, where meaning of the clue was the same as Linesweeper and the objective was to draw two non-touching paths.

Retrieved from "https://wpcunofficial.miraheze.org/w/index.php?title=Linesweeper&oldid=1825"
Categories:
Cookies help us deliver our services. By using our services, you agree to our use of cookies.