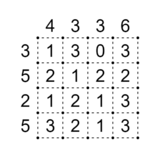 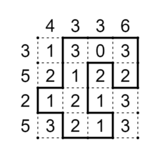 Draw a closed loop along the dotted lines that uses each grid point at most once. The numbers outside the grid indicate the sum of the numbers directly behind edges that are part of the loop in the respective row or column.

Appeared on WPC 2019/Round 12, an "innovations" round. The puzzles were written by Silke Berendes (Germany).

Retrieved from "https://wpcunofficial.miraheze.org/w/index.php?title=Hideout_Fences&oldid=1677"
Categories:
Cookies help us deliver our services. By using our services, you agree to our use of cookies.