Difference between revisions of "Heyawake" 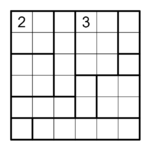 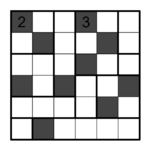 Shade some cells black so that all remaining cells are connected orthogonally and no two black cells share an edge. The grid is divided into regions by thick borders; a number in a region indicates exactly how many cells in that region must be shaded black. Every "word" in the grid (a group of unblackened cells connected to each other either only horizontally or only vertically) may not cross more than one thick border. 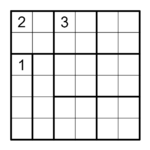 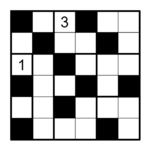 Shade some cells. Shaded cells can’t touch each other by a side. The remaining white area has to be connected. The white area can't span over two consecutive thick boundaries in a single row or column. The numbers indicate the maximum possible continuous white area within a region. There need not be an area equal to this value; the only restriction is there can be no continuous area larger than the value.

Retrieved from "https://wpcunofficial.miraheze.org/w/index.php?title=Heyawake&oldid=2656"
Categories:
Cookies help us deliver our services. By using our services, you agree to our use of cookies.