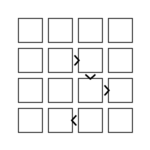 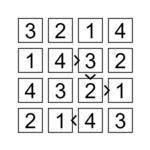 Place a number from 1 to X (integers only) into each cell so that each number appears exactly once in each row and column. (X is the number of cells in each row.) Some inequality relations are given between adjacent cells; they must apply to the numbers in those cells.

The name Futoshiki means "inequality" in Japanese and probably was given when it was published by The Guardian in 2006.

Retrieved from "https://wpcunofficial.miraheze.org/w/index.php?title=Futoshiki&oldid=2455"
Categories:
Cookies help us deliver our services. By using our services, you agree to our use of cookies.