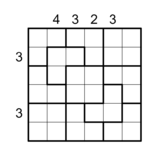 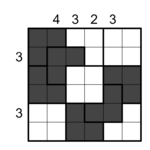 Blacken some areas so that the numbers on the edge indicate how many cells in the corresponding row or column are black. Within an area either all cells must be black or none.

The name Crazy Pavement was given in 2003 by Hans Eendebak when the puzzle was introduced to Breinbrekers magazine. [1] By then shaded cells no longer formed a picture.

Retrieved from "https://wpcunofficial.miraheze.org/w/index.php?title=Crazy_Pavement&oldid=1821"
Categories:
Cookies help us deliver our services. By using our services, you agree to our use of cookies.