From WPC unofficial wiki
Revision as of 16:01, 16 January 2021 by EctoPLASMA (talk | contribs) (Created page with "==Rules== {{Examples|Candy Crush}} Place a letter from A-D in each empty white cell such that there are never three consecutive cells in a horizontal or vertical line contain...")
(diff) ← Older revision | Latest revision (diff) | Newer revision → (diff)
Jump to navigation Jump to search 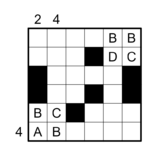 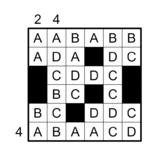 Place a letter from A-D in each empty white cell such that there are never three consecutive cells in a horizontal or vertical line containing the same letter.

In the final solution it must be possible to directly 'eliminate' any letter using any one single swap of two letters sharing a side, not considering gravity and chains. Letters are 'eliminated' if they become part of three or more horizontally or vertically consecutive cells containing the same letter.

Numbers outside the grid indicate the number of different letters in the corresponding direction.

Invented by Prasanna Seshadri (India) in 2017. First appeared on WPC 2017/Round 17, an innovatives round. The name refers to Candy Crush Saga, an immensely popular mobile puzzle game released in 2012.

Retrieved from "https://wpcunofficial.miraheze.org/w/index.php?title=Candy_Crush&oldid=1942"
Categories:
Cookies help us deliver our services. By using our services, you agree to our use of cookies.