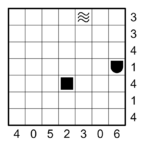 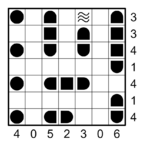 Locate the indicated fleet in the grid. Each piece of a ship occupies a single cell. A cell that does not contain a ship piece is considered "sea". Ships can be rotated. Ships do not touch each other, not even diagonally (that is, if two ship pieces are in adjacent cells, they must be part of the same ship). The contents of some cells are given for you. Each number to the right and bottom of the grid reveals the number of ship pieces that must be located in that row or column (including any that might be given for you).

Pencil-and-paper game version of Battleships traces dates from World War I.[1] Solitaire version is invented by Jaime Poniachik (Argentina) and was first featured in 1982 in the Argentine magazine Humor & Juegos under the name "Batalla Naval." [2]

Listed here are appearances of classic to almost-classic Battleships. For variants, see list of Battleships variants#Appearances in the past WPCs.

Retrieved from "https://wpcunofficial.miraheze.org/w/index.php?title=Battleships&oldid=2608"
Categories:
Cookies help us deliver our services. By using our services, you agree to our use of cookies.