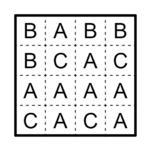 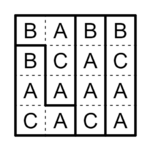 Divide the grid into several regions along the grid-lines. Each region has the letters of the given word, exactly as many times as they appear in the word. Each letter must be part of exactly one region.

Classic puzzle that at least existed in the current form since 1980. Exact origin is unknown, but probably branched off from Shape Division.

Retrieved from "https://wpcunofficial.miraheze.org/w/index.php?title=Area_Division&oldid=2432"
Categories:
Cookies help us deliver our services. By using our services, you agree to our use of cookies.