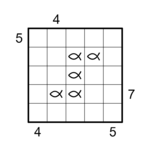 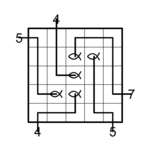 Draw a line from each number (representing anglers) to a fish, so that each fish is caught by exactly one angler. The lines run horizontally and vertically, and the length of each line must be equal to the number from which it starts.

Version with outside clues appeared in WPC 1999/Part 5. The author of the puzzle was László Mérő (Hungary). This is commonly said to be the first appearance of the puzzle.

However, the version with inside clues appeared in WPC 1998/Part 1 under the name "Out Fishing". It is possible that this version was invented much earlier in Puzzler magazine.

Retrieved from "https://wpcunofficial.miraheze.org/w/index.php?title=Anglers&oldid=2489"
Categories:
Cookies help us deliver our services. By using our services, you agree to our use of cookies.