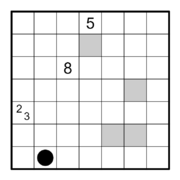 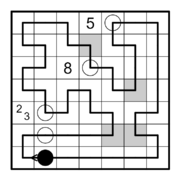 Find a path through the grid that runs horizontally and vertically, starts and ends in the black circle, and passes through each cell except those with numbers exactly once.

Invented by Erhard Notz (Germany) and first appeared on LMD Portal in 2016.

"Passierschein A38" is a stock phrase in German meaning "an imaginary permit that is impossible to get," according to Wiktionary. Derived from 1976 animated film The Twelve Tasks of Asterix.

Retrieved from "https://wpcunofficial.miraheze.org/w/index.php?title=A38&oldid=170"
Categories:
Cookies help us deliver our services. By using our services, you agree to our use of cookies.